Traditional, authentic Bangladeshi cuisine is made up of a diverse range of delicious spices, herbs, rice, fish meats, and bread.

But it is oh-so-much-more than that…

Consisting of rich, creamy, spicy, flavorsome curries and daal, the food in Bangladesh is comparable to Indian food due to the fact that they share a border, a history of British rule, and cultural similarities (including a love of spicy food!).

Unlike the neighboring Hindu region of West Bengal which is mostly vegetarian, Bangladesh is a majority Muslim country which means the Bangladeshi diet is strictly halal and meat is more common.

These famous Bangladeshi dishes are not just delicacies in Bangladesh, but often a big hit in Western countries too.

What is the typical Bangladeshi food?

Similar to many other countries in Asia, Curries are one of the most popular forms of Bangladeshi food. Utilizing the wide range of spices, herbs, oils, meats, potatoes, and aubergines available to craft complex, signature dishes. Many popular ingredients in Bangladesh are, in some way, incorporated into a curry before eating.

Bangladesh is the fourth largest producer of rice in the world and so rice is the staple of the Bangladeshi diet, accompanying most meals, especially curries. Furthermore, fish is also a staple of popular Bangladeshi food, being fused into many traditional dishes.

A wide range of fish and seafood is eaten across Bangladesh, the most popular being the national fish, hilsa, but other common fish include catfish, tilapia and rohu.

Much like Indian food, Bangladeshi cuisine is often eaten with bread such as naan or roti.

Tea was brought over by the British and is considered the national beverage of Bangladesh, being served alongside food and commonly offered to visitors. 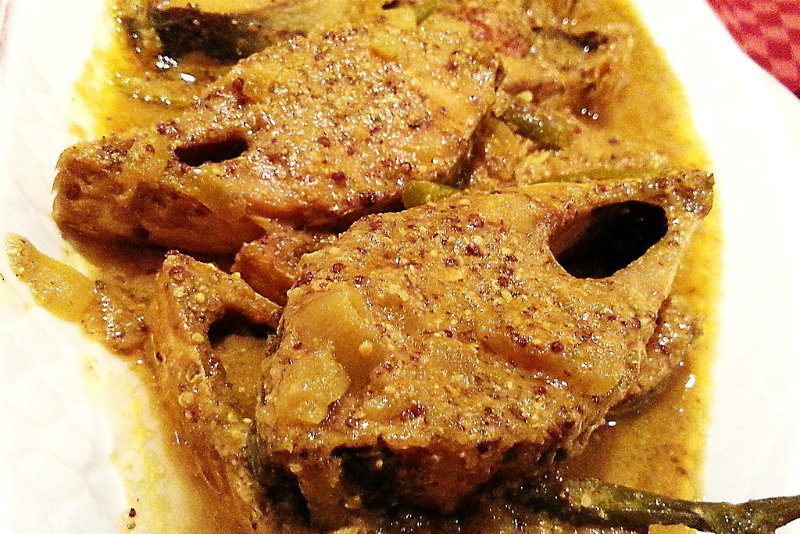 Hilsa fish curry is the national dish of Bangladesh

Hilsa (or ilish) curry is the national dish of Bangladesh, made from the Hilsa fish, and is one of the most popular traditional Bangladeshi dishes.

The Hilsa fish is marinated in turmeric and chili paste, before slowly frying on a low heat and serving with mustard gravy and rice. The result is a combination of sweet and sour flavors with an incredible spicy kick.

Aside from being cheap, Hilsa curry is filling, flavorsome, easy to make and widely available due to the amount of Hilsa fish in the region, especially during the rainy season. The sheer abundance of the Hilsa fish is why Hilsa Curry is the national dish of Bangladesh.

In Bangladesh it is common to eat every part of the Hilsa fish including the head and the eggs, nothing is wasted and each part even has its own unique delicacies. You can find fish egg dishes or fish head curries that are widely revered throughout the region. 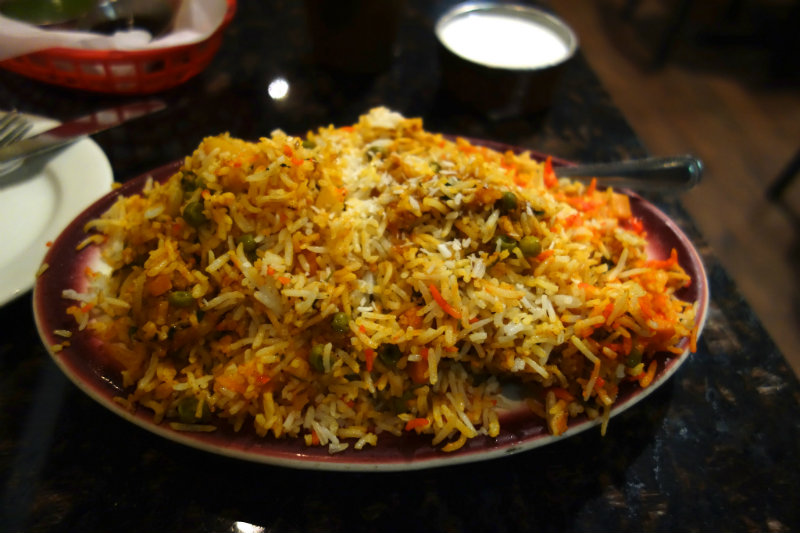 Biryani is a typical rice dish eaten in Bangladesh

Biryani, whilst not unique to Bangladesh, is a spicy rice dish made with meat or fish, rice, potatoes, and spices.

Hugely popular throughout the Indian subcontinent, Bangladeshi biryani is often considered the best in the world.

In the Bengali region, popular meats include mutton, goat, chicken, and beef, but there is such a wide variety of biryani dishes available that you can try.

A true traditional biryani involves different types of cooking and preparation, as marinated meat is layered with rice, potatoes, and spices, the dish is jam-packed with flavor.

You will often find biryani served at special occasions or celebrations such as weddings, but it is also eaten as a regular meal throughout the weak, such is its popularity. 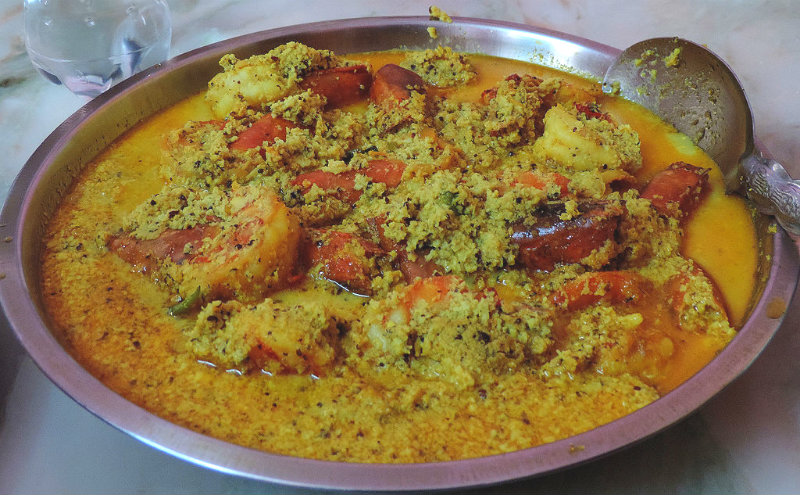 Changri malai curry is the most famous Bangladesh curry dish based on coconut milk and is revered throughout the region, including India.

Chingri Malai (or Chingri Macher Malaikari as it is sometimes known), is a deliciously creamy, satisfying seafood curry that is prepared by cooking prawns or shrimp in a coconut milk sauce with aromatic spices and served with basmati rice. Coconut milk is a very common ingredient in Bangladeshi cuisine, and this Changri Malai curry is a perfect example of that.

The word Malai suggests the dish was actually brought to the region by Malaysian sailors docking at the Bay of Bengal many years ago, and the use of coconut in curries gives credence to this theory since it is popular in South-East Asian cuisine.

Bangladeshi cooking is famed for its use of seafood and fish in curries, so Chingri malai is definitely a dish to try if you’re ever in the region.

Dal is a popular dish throughout the Indian subcontinent, made from lentils, peas, and beans

Dal isn’t unique to Bangladesh but it is so commonly eaten by Bangladeshi’s that it is unequivocally worth mentioning.

Dal refers to lentils, peas, and beans that are dried and split, and then often boiled, seasoned and served in various different forms, most commonly as a thick soup.

Naans, rotis, chapatis and other bread traditionally accompany dal, as well as rice or vegetables.

Whilst very simple to prepare, dal is filling and cheap which makes it very popular in poorer regions of Bangladesh, whilst also still being enjoyed by the more wealthy.

Dal is traditionally made by boiling the mix in water with salt and turmeric. Tomatoes, tamarind or other ingredients are sometimes added depending on taste, and then adding spices such as cumin, chili, onion, garlic or mustard seeds, and garnishing before serving. 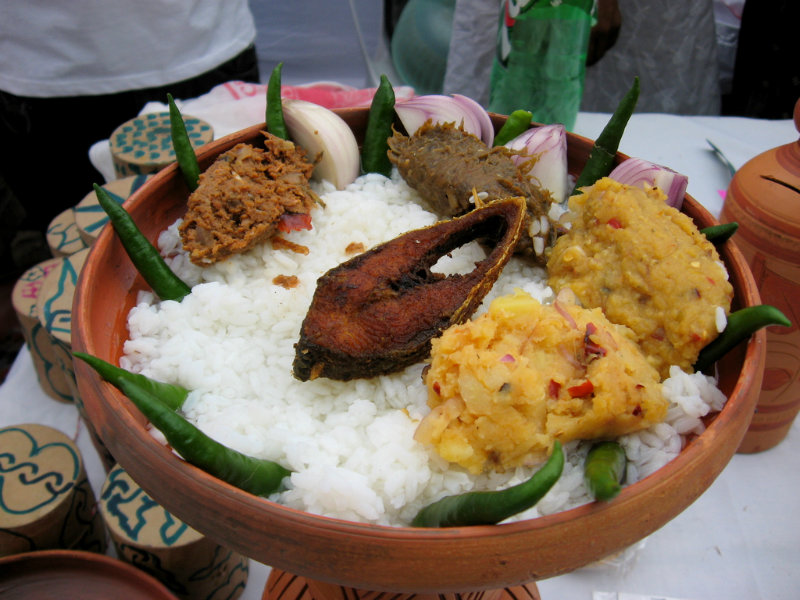 Bangladeshi Panta Bhat is made with soaked rice, left overnight, seasoned, and served with fish, pickles or onions

Panta Bhat is a wonderful example of Bangladeshi food, also enjoyed throughout the Bengal region, and mostly associated with farmers, laborers, and the working class. It is a hugely popular Bangladeshi dish.

Panta Bhat generally uses leftover rice that is soaked in water overnight to ferment, and then served as breakfast the following morning after being seasoned by salt, chili, and onion.

It is a filling and hearty dish, considered to help workers cool down during the hot summer months. You can also drink the water afterward to get a beautiful tangy kick whilst being refreshed!

Furthermore, it is considered even healthier than fresh rice, with many health benefits due to its nutritional value. 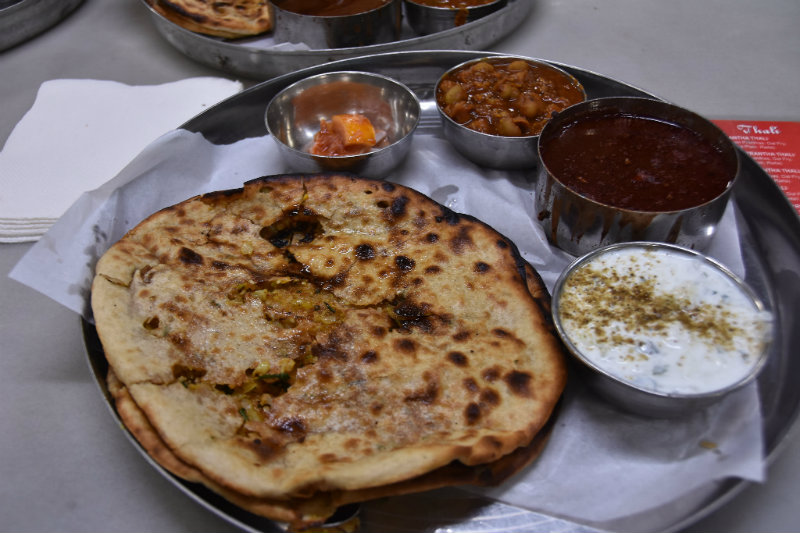 Paratha is a flatbread that is widely eaten throughout Bangladesh, either as a side to other meals or stuffed and served on its own, often for breakfast or as a snack.

Parathas are made by baking whole wheat dough (usually sourced from locally grown wheat) and then shallow frying in ghee or oil.

Stuffing parathas are also very common, with many different filings being popular, including dal, potatoes cauliflower or other vegetables. It can then be served with a small amount of butter on top to melt, a side of chutney or simply as an accompaniment to a curry dish. 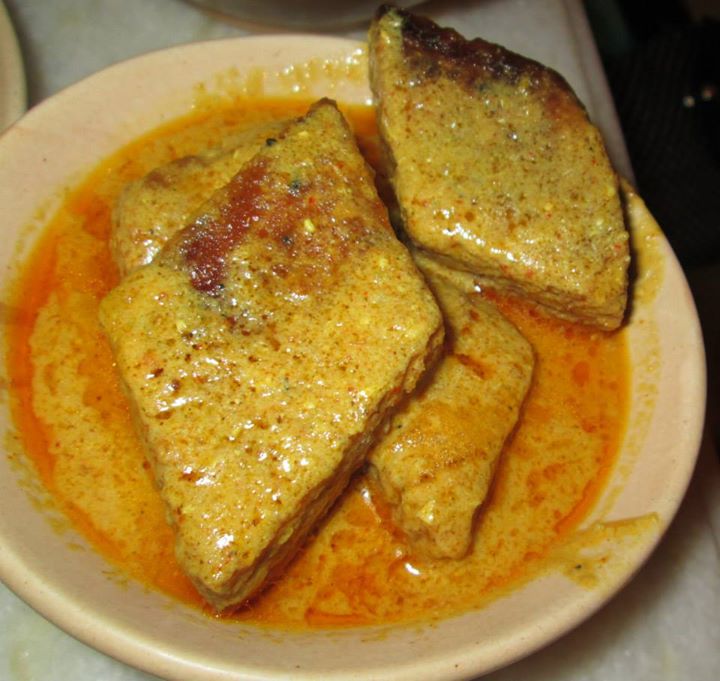 Dhokor Dalna is considered one of the famous signature dishes of Bangladeshi cuisine. The dish uses lentils or dal to make a fried cake, lightly simmered in a tomato-based gravy and seasoned with spices such as ginger, cumin, and coriander.

The dish is then served with steamed rice or with a bread side such as paratha or chapati.

Dhokar dalna also sometimes utilizes onion and garlic in the preparation, although the traditional method of making the dish excludes these ingredients. If included, however, they combine perfectly with the tomato gravy and spices to result in a super tasty vegetarian-friendly side dish. 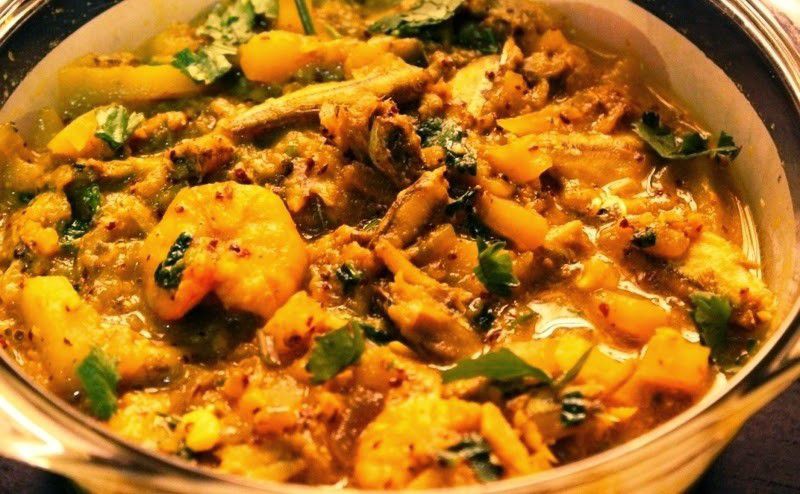 Chorchori is a Bangladeshi dish of charred, spiced vegetables

Chachchari is a very unique style of cooking spiced vegetables that is unique to Bengali cooking and a traditional Bangladeshi dish.

Chachchari is made by first creating a spice mix of ghee, ginger, mustard seeds, cumin seeds and fennel among others, before adding chopped vegetables such as potatoes, cauliflower, and eggplant. Water is then added along with any further seasoning and the mix is left to simmer.

Once the liquid has mostly evaporated the vegetables start to char, as the signature taste begins to develop.

The charred bits are then stirred into a mustard gravy which is poured on to the vegetables and served. 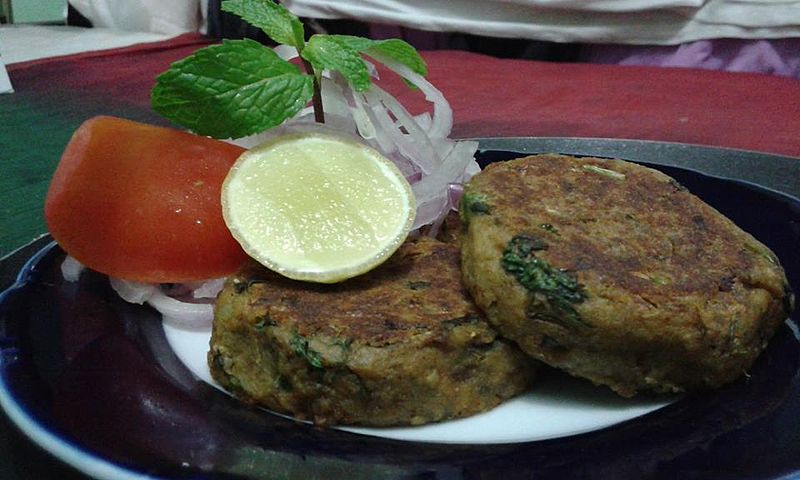 Shami kababs are hugely popular in Bangladesh and throughout the Indian subcontinent. Whilst there are a wide range of different kababs available in Bangladesh, Shami kababs are unreservedly the most popular. They are often served on special occasions which shows just how popular they are.

Beef is most commonly used but can sometimes be replaced with lamb or mutton. The beef is formed in to a burger-like patty with crushed chickpeas and spices such as garlic, onion, turmeric, garam masala and chilies.

The patty is then shallow fried until cooked and served with onions, hot sauce or chili sauce, tomato, onion and salad.

Of course, the best way to really experience Bangladeshi cuisine is to actually go there and take in the sights and smells of the food. Simply wandering the streets of the cities you can explore the bustling markets and street food stalls to really indulge yourself!